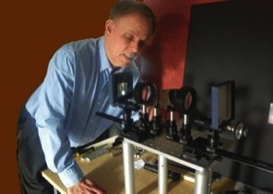 Visibility of color symbology in head-up and head- mounted displays in daylight environments. Color-coded symbology has the potential to enhance the performance of people using head-up and head-mounted displays (HUDs and HMDs). The distinguishing feature of these displays is the optical combiner that presents symbology combined with the forward real-world scene. The presence of high-ambient daylight can desaturate the symbol colors, making them difficult to recognize. We defined a set of colors for testing based on color-coding conventions, color symbology research, and results from our previous testing. We then conducted a series of experiments to test the visibility and naming of color symbols and the legibility of color text mixed with daylight. Results were statistically analyzed and also modeled using color-difference formulae. Specific attention was given the symbol color blue, and an alternative blue color was proposed that had much higher visibility.

Feeling a little blue: Problems with the symbol color blue for see-through displays and an alternative color solution. The color blue is problematic for inclusion in a symbology color set for use by operators with head-up and helmet-mounted displays (HUDs and HMDs), as well as with augmented reality (AR) displays. The distinguishing feature of these see-through displays is the optical combiner that presents color-coded symbology combined with the forward real-world scene. Unlike head-down displays that can use color fills, see-through displays are limited to lines and text. The presence of high-ambient daylight can desaturate symbol colors and make them difficult to recognize. This is especially true for blue symbols that become faint and colorless in moderate daylight as well as when mixed with green night-vision imagery. We propose the alternative color blue prime (blue')—a mix of 100% blue and 50% green that lies between blue and cyan—as an alternative to blue. The color blue’ is more resistant to daylight than blue, yet still retains the color name “blue.” Blue' lags other colors such as green and white in visibility, and its use needs to be moderated. We present experimental data to support the use of blue’ as a basic color code.

Head-mounted display image configurations. A scheme for organizing head-mounted displays based primarily on image configuration and secondarily on the display/optics and head-mounted sensor(s) is offered as a way to clarify design and human interface issues. These attributes are linked to field-of-view, image content and device applications.  An argument is made for discarding confusing and outdated concepts. This organization of a diverse set of display devices is one step toward an eventual handbook of head-mounted displays. These concepts are included in the 2099 text Helmet-Mounted Displays: Sensation, Perception and Cognition Issues, edited by C. E. Rash et al., U.S. Army Aeromedical Research Laboratory, Ft. Rucker AL.

Improving the utility of a binocular HMD in a faceted flight simulator was presented at the Interservice/Industry Training, Simulation & Education Conference (I/ITSEC). Viewing comfort and visual performance were linked to a mismatch between virtual binocular symbology and real display screens. The display screens simulated a faceted simulator such as the Air Force's M2DART. Nominated as a Best Paper at the conference.

Mitigating visual anomolies for binocular HMDs integratred wth faceted simulators was presented at the Interservice/Industry Training, Simulation & Education Conference (I/ITSEC). The effects of a mismatch between virtual binocular symbology and real display screens were studied. The display screens simulated a faceted simulator such as the Air Force's M2DART. No one HMD setting prevented the occurence of visual discomfort or diplopia. Follow-on research is investigating the mitigation of these effects with an adaptive vergence HMD.

Sensor offset HMD perception and performance, SPIE Proceedings, Vol. 6557. The perceptual and performance effects of viewing HMD sensor-offset video were investigated in a series of small studies and demonstrations. A sensor-offset simulator was developed with three sensor positions relative to left-eye viewing: inline and forward, temporal and level, and high and centered. Several manual tasks were used to test the effect of sensor offset: card sorting, blind pointing and open-eye pointing. An obstacle course task was also used, followed by a more careful look at avoiding specific obstacles. Once the arm and hand were within the sensor field of view, the user demonstrated the ability to readily move to the target regardless of the sensor offset. A model of sensor offset was developed to account for these results.

I have an extensive collection of publications and technical reports from the 70s through the 00s in the areas of human factors, visual performance, personal displays, anthropometry, color vision, spatial visiion, binocular vision and optometry. Some of these documents are obscure.